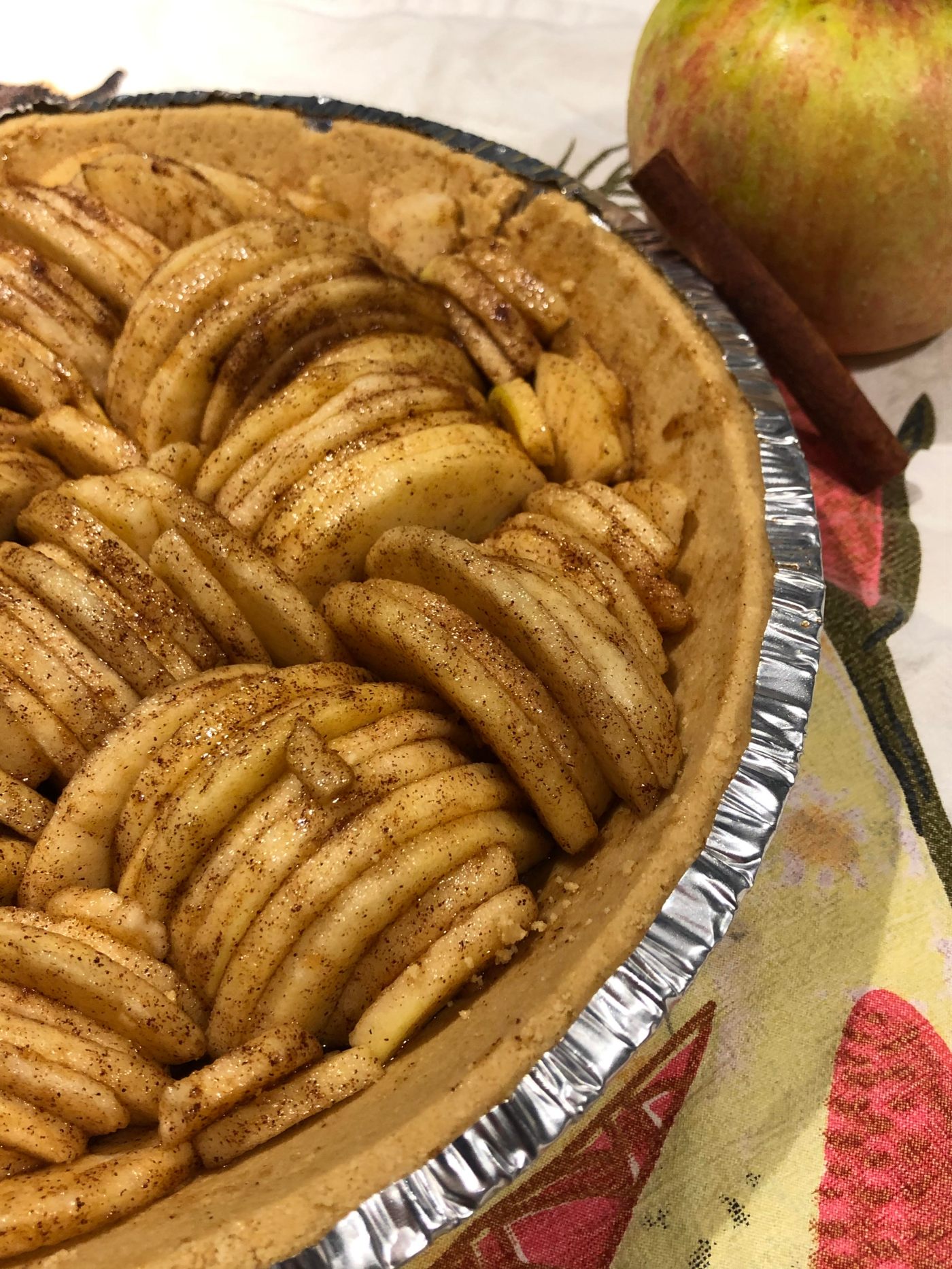 Apples are in season, and I have a fridge full of them. I can’t resist buying more than we can eat and then I fret over them going bad before we can eat them all. Maybe I’ll learn restraint someday…but probably not.

I found some great recipes for apples this go around. I will be doing a squash soup with Honeycrisps that I hope will turn out as amazing as it looks. But for today, I decided to try this recipe from Delish: Apple Tart by Lauren Miyashiro. It has that rustic look I love, didn’t require a fussy crust, and only took an hour and a half all in, including the cooking time (That’s why this is Quick-ish. You just can’t put quick in front of a recipe that takes an hour and twenty minutes all in.)

I’m going to be straight up with you. I cheated. I used a premade store bought crust. Not even the ones you roll out and put in a pretty pie plate. Nope. I used one of the ones the Elf makes with the disposable tin and everything. I would like to tell you I feel shame, but mostly I feel like I don’t want to spend all morning baking a pie. Plus it was in the pantry.

This means I can’t speak about the crust. It looks painfully simple and sounds delicious, so I will include it in the recipe and leave it up to you. How can you go wrong with 10 tablespoons of butter. I don’t think you can.

The recipe says to core and slice the apples. If you spend any time at all making apple anything, you need to invest in one of these:

It’s an apple-corer-peeler-slicer and it will make apple season your favorite season. You end up with slices that are totally uniform so they bake evenly. Just watch yourself – they are sharper than they look.

The one thing I didn’t like about this recipe was there was no guidance on what apples to use. I know from experience that one usually bakes with tart apples, like granny smiths. I had some Pristine apples from Cosgrove Farms in the fridge, so I used those. Feel free to experiment with what you have on hand. Galas, Fujis, or any baking apples would probably work fine. The only one I’d definitely stay away from is Red Delicious. They don’t usually bake well.

I sent the apples through the slicer, then dumped them in a big bowl with the brown sugar, cinnamon, vanilla extract, and lemon juice. I didn’t have lemons so I used a tablespoon of the kind you keep in the fridge. Mix it up good. I always use my hands. It’s faster, just make sure you wash up good first.

In the picture on the Delish site they put the apples in an amazing rustic pattern where it looks like the apples are sliced, then picked up and put in the crust. I managed to achieve the the look even after separating them all up to distribute the spice and sugar. It just took a little patience. Look at the comments on the original recipe for a million ideas on how to arrange your apple slices.

It went together faster than the 30 minutes I was expecting. Came out looking so pretty:

Rave reviews from our friends. I can only imagine how much better it would have been if I had made the crust. It was very tasty at room temperature, which makes this the perfect dessert to bring to a fall feast.