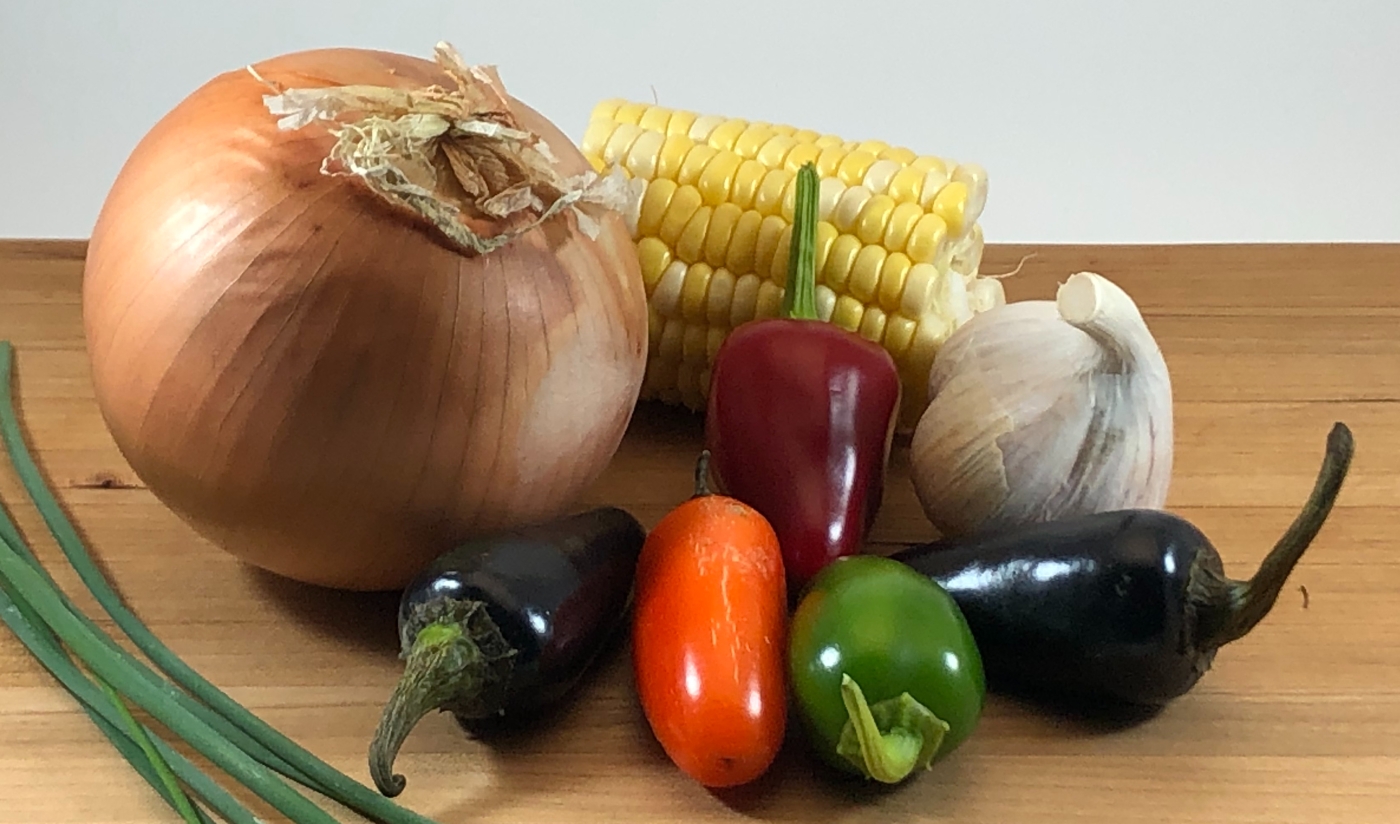 With all the amazing peppers available on the site, and an abundance of corn in my fridge, I went surfing to find a recipe that would combine the two. I found this recipe for Jalapeño Popper Corn Chowder from Homemade in the Kitchen. She also had a straight up Jalapeño Soup recipe that looked great as well. After reading through both of them I decided to go with the chowder, but the jalapeños in the second recipe were roasted. So I decided to add that bit to the chowder recipe.

The original recipe calls for 4 jalapeños or a cup. I recently chopped a half cup of jalapeños and it took considerably more than 4, so I’m not sure if she meant a cup of jalapeño peppers that were then chopped. I had a bunch of hot peppers in the fridge: Hungarian blacks, orange jalapeños, and red jalapeños. They were all about the size of my thumb. I settled on 6 peppers, 3 of each. I figured I could always add more if that wasn’t enough. After my first serving, I think that was the perfect amount.

I took all the seeds and membranes out. That’s where all the heat is. If you are looking for flavor without heat, this is a very important step. I wasn’t too strict about it because I don’t mind heat. One thing I highly recommend is wearing gloves if you are processing more than one jalapeño. I have an abundance of food service gloves, so I use those. I have also used the big gloves you use when washing dishes. I just label them “Jalapeño Gloves” so I don’t accidentally use them to clean the shower. Most important tip – never touch your face when dealing with jalapeños. I cannot stress this enough. You haven’t known pain until you rub your eye with jalapeño on your fingers. It is excruciating and you just have to wait it out. It will also set your ears on fire if you happen to scratch those. Don’t do it.

Another change I made was the cheeses. I had a block of goat jack cheese and a container of chevr&eacute; so I subbed the chevr&eacute;  for the cream cheese and the jack for the cheddar. The goat jack has a nice salty twang to it and is softer, so it melts quicker.

And since I had more ears of corn than I could safely store in the fridge, I used fresh corn instead of frozen. Four ears blanched in salted boiling water for about 4 minutes gave me the 2 cups I needed. I love using fresh when I can, and this time of year I’ll save my frozen veggies for the long stretches when local fresh isn’t available. Using canned and frozen makes this a much quicker meal, though. And I’m sure it’s just as tasty.

I took the soup to work on Tuesday, and it got rave reviews. In fact, the slow cooker was almost licked clean. There is no better review that that.

Instructions
1. Heat your oven to 400°
2. Place jalapeños cut side down on a parchment paper lined cookie sheet. Cook for 15 minutes or until browned slightly. Then let them cool and dice.
3. In a large deep sided pan, sauté bacon until crisp. Remove the bacon but leave the fat in the pan.
4. Melt the butter in the bacon fat over medium heat. Add the chopped onions and cook until clear and just beginning to brown (3-5 minutes).
5. Add the garlic and diced jalapeños and cook until you can smell the garlic (about 1 minute)
6. Add flour and stir to coat the veggies.
7. Add broth and stir. Bring to a boil.
8. Turn the heat down and simmer the soup for 5-7 minutes.
9. Add the cheeses and stir until they are melted (this will take longer than you think)
10. Add blanched corn and cook for another 5 minutes.
11. Add bacon just before serving.
slic